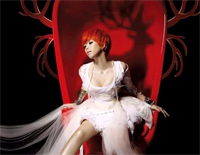 Free Hurt After Love piano sheet music is provided for you. So if you like it, just download it here. Enjoy It!

Hurt After Love is a song performed by A-Mei who is a Taiwanese Puyuma singer and record producer. It was included on her twelfth studio album, Amit released in June 2009. The album won four Golden Melody Awards for Best Mandarin Album, Best Mandarin Female Singer, Best Album Producer.


Meanwhile, we also offer Listen to the Sea sheet music for you to download
[ + More Information ]