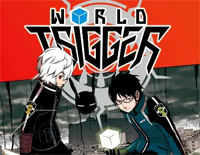 Free Force piano sheet music is provided for you. So if you like it, just download it here. Enjoy It!

Force is used as the opening theme for the second season of World Trigger. World Trigger is a Japanese anime series based on the manga series of the same name written and illustrated by Daisuke Ashihara. During Jump Festa '20, it was announced that the series will receive a second season, with the cast reprising their roles. Toei Animation is returning to produce the anime.


Meanwhile, we also offer Ashita no Hikari sheet music for you to download
[ + More Information ]