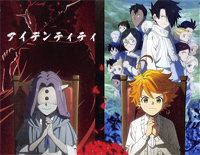 Free Identity piano sheet music is provided for you. So if you like it, just download it here. Enjoy It!

Identity
is a song performed by Kiiro Akiyama as the second season's opening theme song for The Promised Neverland.

The second season of The Promised Neverland is a 2021 Japanese anime television series adapted from the manga series of the same name written by Kaiu Shirai and illustrated by Posuka Demizu. On March 29, 2019, a second season was officially announced to be in production. The second season was originally set for an October 2020 release, but due to the COVID-19 pandemic, it was postponed to January 8, 2021 on Fuji TV's Noitamina.