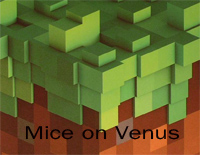 Free Mice on Venus piano sheet music is provided for you. So if you like it, just download it here. Enjoy It!

Mice on Venus is one of the soundtrack of the sandbox video game Minecraft. Minecraft has been critically acclaimed, winning several awards and being cited as one of the greatest video games of all time. Social media, parodies, adaptations, merchandise, and the annual MineCon conventions played large roles in popularizing the game.

And Mice on Venus was primarily composed by German musician Daniel Rosenfeld, better known as C418.