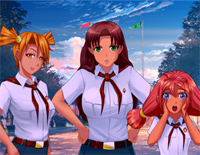 Free Forest Maiden piano sheet music is provided for you. So if you like it, just download it here. Enjoy It!

Forest Maiden is a song by Sergey Eybog as one of the original soundtrack to Russian-language Bishoujo Game Everlasting Summer. The game, built using the Ren'Py Visual Novel Engine, was first released as a Russian-language demo (consisting of the first two in-game days) on New Year's Day in 2010. The full Russian-language version of the game finally received a freeware release in December of 2013. An English version became available in November of 2014, still distributed for free, via Steam.