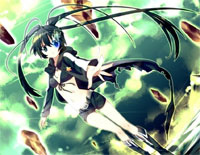 Black★Rock Shooter (ブラック★ロックシューター Burakku Rokku Shūtā) is a Japanese media franchise based on characters created by illustrator Ryohei "Huke" Fuke. It revolves around its eponymous character, a mysterious black haired girl with a blazing blue eye. The original illustration inspired a song of the same name by Supercell, which gained popularity on the Nico Nico Douga website.

The origins of Black Rock Shooter date back to an original character illustration titled "Black Rock Shooter" by illustrator Ryohei Fuke, best known by his handle 'Huke', who posted it on his blog and the online artist community Pixiv on December 26, 2007. Ryo of Supercell was inspired by the illustration and created the song "Black Rock Shooter" based on that character using vocals from the Vocaloid singing synthesizer Hatsune Miku. Huke joined Supercell and provided the illustrations used in the music video of the song, which was later posted online on the video sharing website Nico Nico Douga on July 13, 2008, which as of August 2009 had over 2.2 million views. The song was later used as the opening theme for the 2012 anime television series.