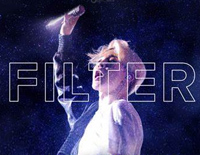 Free Filter piano sheet music is provided for you. So if you like it, just download it here. Enjoy It!

Filter is a Latin pop-esque song performed by Jimin, featuring his different sides as a person. It was included on South Korean boy band BTS' album Map of the Soul: 7 released in February 2020, by Big Hit Entertainment.

During the same month, "Filter" set a record for the biggest streaming debut among all Korean songs on Spotify with over 2.2 million streams in its first 24 hours of release, and went on to become the fastest Korean solo in the platform's history to surpass 20–60 million streams. It is also the first and only solo BTS b-side track to receive a song of the year nomination at the Gaon Chart Music Awards.