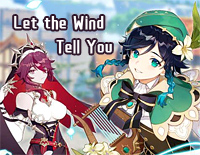 Free Let the Wind Tell You piano sheet music is provided for you. So if you like it, just download it here. Enjoy It!

Let the Wind Tell You is a song from the action role-playing game Genshin Impact. The game features an open-world environment and action-based battle system using elemental magic and character-switching, and uses gacha game monetization for players to obtain new characters, weapons, and other resources. It received a generally positive reception, with critics praising the combat and open-world freedom, while some criticism was raised at its endgame content and monetization. The game grossed over $874 million within five months.