Koi no Uta-Fly Me to the Moon OP 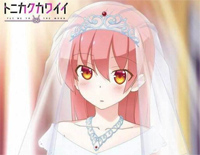 Koi no Uta-Fly Me to the Moon OP Introduction

Free Koi no Uta piano sheet music is provided for you. So if you like it, just download it here. Enjoy It!

Koi no Uta is used as the opening theme song for the anime television series Fly Me to the Moon, also known outside Japan as Tonikawa: Over the Moon for You. The series is produced by Seven Arcs and directed by Hiroshi Ikehata, with Kazuho Hyodo writing the scripts, Masakatsu Sasaki designing the characters, and Endō composing the music. It ran for 12 episodes from October 3 to December 19, 2020 on Tokyo MX, ytv and BS-NTV.

And Koi no Uta is performed by Akari Kitō, a Japanese voice actress and singer from Aichi Prefecture affiliated with Pro-Fit. She debuted in 2014, acted her first main role in Time Bokan 24 (2016), and has since received more major and leading roles.


Meanwhile, we also offer Tsuki to Hoshizora sheet music for you to download
[ + More Information ]