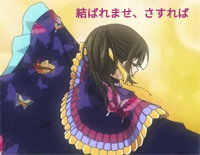 Free Musubaremase Sasureba piano sheet music is provided for you. So if you like it, just download it here. Enjoy It!

Musubaremase Sasureba is one of the original soundtrack to the anime series Kamisama Kiss. Originally Kamisama Kiss is a Japanese manga series written and illustrated by Julietta Suzuki and serialized by Hakusensha in the shōjo manga magazine Hana to Yume. The series is licensed for regional release in North America by Viz Media as part of their Shojo Beat imprint. An anime adaptation has been produced by TMS Entertainment and directed by Akitaro Daichi and began airing in October 2012. It has been streamed by Funimation Entertainment in North America. A second season was announced and premiered during January 2015.

And Musubaremase Sasureba is composed by Toshio Masuda. Toshio Masuda is a Japanese composer. He has composed and synthesized scores for several Japanese television shows and animated series.