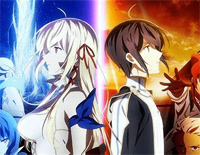 Free Against. piano sheet music is provided for you. So if you like it, just download it here. Enjoy It!

Against. is used as the opening theme song for the anime series Our Last Crusade or the Rise of a New World. The series was animated by Silver Link and directed by Shin Ōnuma and Mirai Minato, with Kento Shimoyama handling series composition and Kaori Sato as character designer and chief animation director.

And Against. is performed by Kaori Ishihara who is a Japanese voice actress, pop singer and idol managed by Style Cube. As a solo singer, she recorded several character songs for one of each characters. A couple of singles have charted on Oricon.