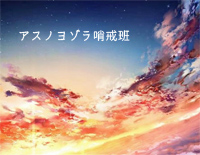 Free Asu no Yozora Shoukaihan piano sheet music is provided for you. So if you like it, just download it here. Enjoy It!

Asu no Yozora Shoukaihan, also known as Night Sky Patrol of Tomorrow, is an original song by Orangestar. It was uploaded to YouTube on January 11, 2015. And it is used as one of the background music for the game Taiko no Tatsujin: Drum 'n' Fun!.

This song was later rearranged and uploaded as "Your Night Sky Patrol". This version was uploaded to Nico Nico on August 19, 2017.

Both versions have entered the Hall of Legend. The original has exceeded over 10 million YouTube views. Hence, this is Orangestar's best work, and one of IA's most notable songs.

The original version is featured in the albums Vocalofantasy and Mikansei Eight Beats.