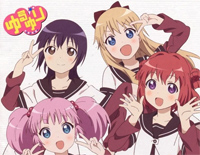 Free Yuriyurarararayuruyuri Daijiken piano sheet music is provided for you. So if you like it, just download it here. Enjoy It!

Yuriyurarararayuruyuri Daijiken is used as the opening theme song for the anime series YuruYuri. Originally YuruYuri is a Japanese manga series written and illustrated by Namori. An anime adaptation by Doga Kobo aired in Japan between July and September 2011, with a second season airing between July and September 2012. An original video animation by TYO Animations was released on February 18, 2015, followed by two TV specials which aired in August and September 2015. A third TV season by TYO Animations aired between October and December 2015.