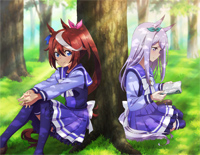 Free Komorebi no Yell piano sheet music is provided for you. So if you like it, just download it here. Enjoy It!

Komorebi no Yell is used as the ending theme song for the second season of the anime series Uma Musume Pretty Derby. Originally Uma Musume Pretty Derby is a multimedia franchise created by Cygames. A spin-off anime television series adaptation of Umayon aired from July 7 to September 22, 2020. A second season animated by Studio Kai aired from January 5 to March 30, 2021.