Toppakō-Haikyū To The Top OP 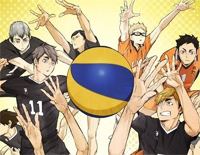 Toppakō-Haikyū To The Top OP Introduction

Free Toppakō piano sheet music is provided for you. So if you like it, just download it here. Enjoy It!

Toppakō is used as the opening theme song for the fourth season of Haikyu!!, titled Haikyū!! To The Top. It is an anime adaptation of a manga series written by Haruichi Furudate. It was produced by Production I.G and premiered on January 11, 2020 on the Super Animeism block.

And Toppakō is sung by Super Beaver, a Japanese rock band formed in 2005. The band published their first mini-album in 2008 under the indie label Rebelphonic, and it sold fairly well. Their first two mini-albums were sold exclusively at Tower Records.


Meanwhile, we also offer One Day sheet music for you to download
[ + More Information ]