Ashes On The Fire-Attack on Titan The Final Season OST 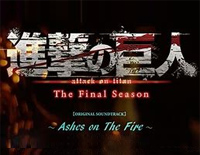 Free Ashes On The Fire piano sheet music is provided for you. So if you like it, just download it here. Enjoy It!

Ashes On The Fire is one of the original soundtrack to the fourth and final season of the Attack on Titan anime television series, subtitled Attack on Titan: The Final Season. The series is produced by MAPPA, chief directed by Jun Shishido, and directed by Yūichirō Hayashi, replacing Tetsurō Araki and Masashi Koizuka respectively. Scriptwriter Hiroshi Seko took over the series composition from Yasuko Kobayashi, and Tomohiro Kishi replaced Kyōji Asano as character designer due to the series switching production studios.


Meanwhile, we also offer Boku no Sensō sheet music for you to download
[ + More Information ]