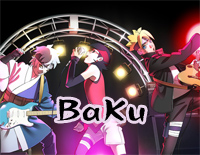 Free BAKU piano sheet music is provided for you. So if you like it, just download it here. Enjoy It!

The trio Ikimonogakari is well-known as the band who created the opening songs for the predecessor anime “Naruto: Shippuden“, such as Hotaru no Hikari in 2009, but maybe more prominently, Blue Bird in 2008 that has become one of the signatures of the series.

Notably, for the single BAKU, the two aforementioned songs are once again making their appearances, but this time as remastered coupling tracks. In addition, a remix of Blue Bird is added by the American DJ and producer Slushii.


Meanwhile, we also offer It's all in the game sheet music for you to download
[ + More Information ]