Caste Room-Classroom of the Elite OP 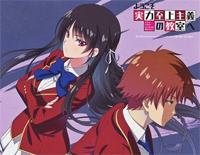 Free Caste Room piano sheet music is provided for you. So if you like it, just download it here. Enjoy It!

Caste Room is used as the opening theme song for the anime series Classroom of the Elite. The anime television series adaptation was announced and aired from July 12 to September 27, 2017 on AT-X and other channels. Seiji Kishi and Hiroyuki Hashimoto directed the anime at Lerche. Aoi Akashiro handled the series composition, while Kazuaki Morita designed the characters.

And Caste Room is performed by ZAQ who is a Japanese singer, lyricist, composer and arranger signed to Lantis.