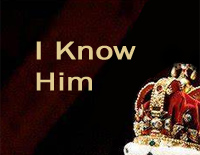 Free I Know Him piano sheet music is provided for you. So if you like it, just download it here. Enjoy It!

I Know Him is the 10th song of Act Two of Hamilton, as well as the 33rd song of the musical. King George III finally hears the news of America's presidential election, and when he finds out that John Adams will be the next president, is in awe and shock that Adams would be chosen based on past impressions of him.


Meanwhile, we also offer One Last Time sheet music for you to download

The Lyrics of I Know Him: