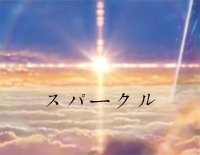 Free Sparkle piano sheet music is provided for you. So if you like it, just download it here. Enjoy It!

Sparkle, or Supākuru, is a song from the Kimi no Na wa. film. It is one of its four theme songs and four vocals. It is played while Mitsuha departs from the mountaintop which Taki is on and attempts to convince her father.

Kimi no Na wa. (Your name.) is a 2016 Japanese anime romantic fantasy drama film directed, written, and edited by Makoto Shinkai, based on his own novel of the same name. Your Name was animated by CoMix Wave Films and distributed by Toho. The film premiered at the Anime Expo 2016 convention in Los Angeles, California on July 3, 2016, and premiered in Japan on August 26, 2016.


Meanwhile, we also offer different version of Sparkle-Supākuru sheet music for you to download
[ + More Information ]