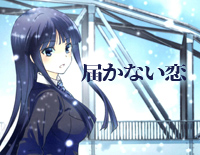 Free Todokanai Koi piano sheet music is provided for you. So if you like it, just download it here. Enjoy It!

Todokanai Koi is performed by female Japanese singer-songwriter Rena Uehara as the opening for White Album 2.

Originally White Album 2 is a trilogy of Japanese adult visual novels developed by the visual novel company Leaf for the Microsoft Windows PC, and is the sequel to Leaf's earlier visual novel, White Album. The gameplay of White Album 2 follows a linear plot line which offers pre-determined scenarios with courses of interaction. An anime television series adaptation aired in Japan between October and December 2013.