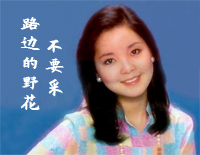 Free Do Not Pick the Roadside Flowers piano sheet music is provided for you. So if you like it, just download it here. Enjoy It!

Do Not Pick the Roadside Flowers is a song performed by Teresa Teng who was a Taiwanese singer, actress, musician and philanthropist. There are three versions. The first one was released in June 1973 and included on her album Teenage Love Girl. The second one was from her album Greatest Hits released in 1977. While the last one was Indonesian language that was named Ingatlah Diriku.