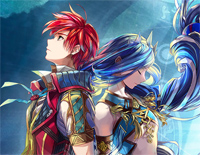 Free Lacrimosa of Dana piano sheet music is provided for you. So if you like it, just download it here. Enjoy It!

Lacrimosa of Dana is one of the background music for Ys VIII: Lacrimosa of Dana. Ys VIII: Lacrimosa of Dana is an action role-playing game developed by Nihon Falcom and published and localized (in French and English) in North America and Europe by NIS America. A part of the Ys series, it was first released in Japan by Falcom for the PlayStation Vita in July 2016, with later worldwide releases for PlayStation 4, Microsoft Windows, Nintendo Switch. An abridged version for Android and iOS is also under development. The game had sold over 500,000 copies by the end of 2018.