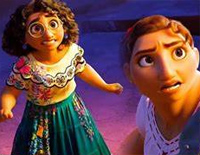 Free Surface Pressure piano sheet music is provided for you. So if you like it, just download it here. Enjoy It!

Surface Pressure is a song that is featured in Disney's 2021 animated feature film, Encanto. It is performed by Jessica Darrow. On the music streaming platform Spotify, this track has over 20 million plays. Miranda added that Luisa’s experience is a shared feeling of many eldest siblings.


Meanwhile, we also offer We Don't Talk About Bruno sheet music for you to download

The Lyrics of Surface Pressure: