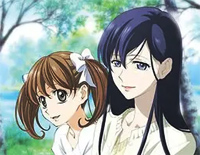 Free Kumori Garasu no Mukō piano sheet music is provided for you. So if you like it, just download it here. Enjoy It!

Kumori Garasu no Mukō is sung by Japanese singer Kaori Hikita. It is used the ending theme song for the fourth season is the anime series Maria-sama ga Miteru.

Maria-sama ga Miteru Season 4 aired between January 3 and March 28, 2009 on AT-X. The series was released by Geneon to six DVD compilation volumes from March to August 2009. Instead of Yukihiro Matsushita who had directed the first three seasons, the fourth season is directed by Toshiyuki Katō.