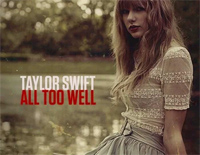 All Too Well-Taylor Swift Introduction

Free All Too Well piano sheet music is provided for you. So if you like it, just download it here. Enjoy It!

All Too Well is a song from American singer-songwriter Taylor Swift's fourth studio album, Red released on October 22, 2012.

It is a power ballad combining country rock, soft rock, folk and arena rock styles, with lyrics narrating a romantic relationship and its subsequent dissolution using vivid imagery. It is often regarded as Swift's greatest song by music critics, fans, and media outlets.

In 2021, following the controversy regarding her masters, Swift re-recorded two versions of "All Too Well"—that of the 5-minute track and its unabridged, 10-minute-long version—for her second re-recorded album, Red (Taylor's Version), released on November 12 via Republic Records.


Meanwhile, we also offer Blank Space-Taylor Swift sheet music for you to download

The Lyrics of All Too Well: