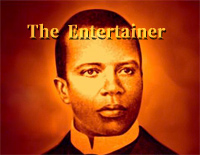 Free The Entertainer piano sheet music is provided for you. So if you like it, just download it here. Enjoy It!

The Entertainer is a 1902 classic piano rag written by Scott Joplin. It was sold first as sheet music, and in the 1910s as piano rolls that would play on player pianos.

As one of the classics of ragtime, it returned to international prominence as part of the ragtime revival in the 1970s, when it was used as the theme music for the 1973 Oscar-winning film The Sting. Composer and pianist Marvin Hamlisch's adaptation reached #3 on the Billboard pop chart and spent a week at #1 on the easy listening chart in 1974. The Sting was set in the 1930s, a full generation after the end of ragtime's mainstream popularity, thus giving the inaccurate impression that ragtime music was popular at that time.


Meanwhile, we also offer different version of The Entertainer sheet music for you to download
[ + More Information ]