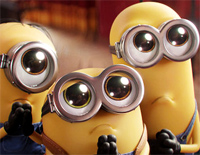 Free Bang Bang piano sheet music is provided for you. So if you like it, just download it here. Enjoy It!

Bang Bang is a song performed by Hong Kong singer-songwriter G.E.M.. And it is used as an insert song for 2022 American computer-animated comedy film Minions: The Rise of Gru.

After being delayed for two years due to the COVID-19 pandemic, Minions: The Rise of Gru had its world premiere at the Annecy International Animation Film Festival on June 13, 2022, and was released in the United States on July 1, 2022, by Universal Pictures, in standard and select IMAX theaters. Critics praised its musical numbers and entertainment value for children, while criticism was mostly directed toward the film's plot. The film has grossed $219 million worldwide, making it the tenth-highest grossing film of 2022.


Meanwhile, we also offer Paint-G.E.M. sheet music for you to download
[ + More Information ]