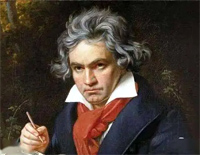 Free Piano Sonata No. 8 2nd Movement piano sheet music is provided for you. So if you like it, just download it here. Enjoy It!

The second movement, "Adagio cantabile", especially, makes use of a theme remarkably similar to one in the spacious second movement of Mozart's sonata.

The famous cantabile melody is played three times, always in A♭ major, separated by two modulating episodes; the movement is thus a simple rondo rather than the sonata form more common for movements of this seriousness. The first episode is set in F minor (the relative minor of A♭ major), further modulating to E♭ major before returning to the main theme. The second episode begins in A♭ minor and modulates to E major. With the final return of the main theme, the accompaniment becomes richer and takes on the triplet rhythm of the second episode. There is a brief coda.