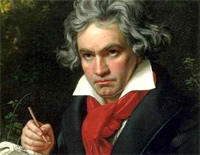 Free Romance for violin and orchestra No. 2 in F major, Op. 50 piano sheet music is provided for you. So if you like it, just download it here. Enjoy It!

Romance for violin and orchestra No. 2 in F major, Op. 50 is the second of two such compositions by German composer and pianist Ludwig van Beethoven. It was written in 1798 but not published until 1805 (by which time Beethoven had completed and published the other work, Romance No. 1 in G major, Op. 40). The accompaniment is for flute and a pair each of oboes, bassoons and horns, with strings. The length is about eight minutes, Beethoven gives the tempo "Adagio Cantabile".

A ballet based on this work, titled Beethoven Romance, was premiered by New York City Ballet on 2 February 1989.