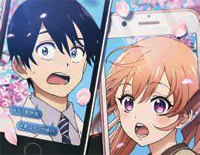 Free Glitter piano sheet music is provided for you. So if you like it, just download it here. Enjoy It!

Glitter is sung by Japanese rock band Sumika (stylized as sumika). And it is used as the second opening theme song for the anime series A Couple of Cuckoos.

Originally A Couple of Cuckoos (Cuckoo's Fiancee) is a Japanese manga series written and illustrated by Miki Yoshikawa. It was originally published as a one-shot in September 2019, before beginning serialization in Kodansha's Weekly Shōnen Magazine in January 2020. An anime television series adaptation by Shin-Ei Animation and SynergySP premiered in April 2022 on TV Asahi's NUMAnimation block.