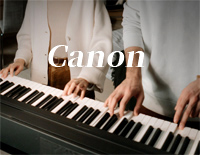 Canon is a contrapuntal (counterpoint-based) compositional technique. Among them, the most famous work is Pachelbel's Canon by the German Baroque composer Johann Pachelbel. The canon was originally scored for three violins and basso continuo and paired with a gigue. Both movements are in the key of D major. Although a true canon at the unison in three parts, it also has elements of a chaconne. Neither the date nor the circumstances of its composition are known (suggested dates range from 1680 to 1706), and the oldest surviving manuscript copy of the piece dates from the 19th century.