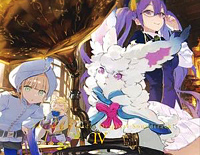 Free Kienai Omoi piano sheet music is provided for you. So if you like it, just download it here. Enjoy It!

Kienai Omoi is composed by Japanese composer Keita Haga. And it is also used as one of the original soundtrack for Fate/Grand Order.

is originally a free-to-play Japanese mobile game, developed by Lasengle (formerly Delightworks) using Unity, and published by Aniplex, a subsidiary of Sony Music Entertainment Japan. Later, it was adapted into TV animation and so on.