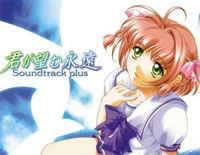 Free Amagumo piano sheet music is provided for you. So if you like it, just download it here. Enjoy It!

Amagumo (Rain Cloud) is composed by Japanese musician Ado Torai. And it is used as one of the original soundtrack for the game Kimi ga Nozomu Eien.

Kimi ga Nozomu Eien (The Eternity You Desire), or Kiminozo for short, is a Japanese adult visual novel developed by Âge and released on August 3, 2001, for Windows. It was later ported to the Dreamcast and PlayStation 2. The gameplay in Kimi ga Nozomu Eien follows a branching plot line which offers pre-determined scenarios with courses of interaction, and focuses on the appeal of the eight female main characters by the player character.


Meanwhile, we also offer Hoshizora no Waltz sheet music for you to download
[ + More Information ]