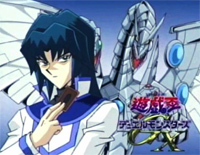 Free Camula's Theme piano sheet music is provided for you. So if you like it, just download it here. Enjoy It!

Camula's Theme is an instrumental composition from the Japanese Yu-Gi-Oh! anime. It is the non-listed OST on Yu-Gi-Oh! GX. And it is composed by self-taught musician Yutaka Minobe.

Yu-Gi-Oh! GX, also known in Japan as Yu-Gi-Oh! Duel Monsters GX, is an anime spin-off and sequel series to the original Yu-Gi-Oh! Duel Monsters anime. It aired in Japan on TV Tokyo from October 6, 2004 to March 26, 2008, and was succeeded by Yu-Gi-Oh! 5D's. Yu-Gi-Oh! GX follows the exploits of Jaden Yuki (Judai Yuki in the Japanese versions) and his companions as he attends Duel Academia (Duel Academy in the 4Kids version). It was later dubbed in English by 4Kids Entertainment and a manga spinoff was created by Naoyuki Kageyama. The series was followed by Yu-Gi-Oh! 5D's in 2008.