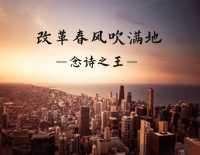 Free The Spring Breeze of Reform Blows all over the Ground piano sheet music is provided for you. So if you like it, just download it here. Enjoy It!

The Spring Breeze of Reform Blows all over the Ground, or called The King of Recitation, is a song created by Xiao Ke Er and based on the golden sentences in Zhao Benshan's sketch comedy. Originally it is composed by PME.

The song was released on February 11, 2018, and became popular at the end of the same year, with high playback.


Meanwhile, we also offer different version of The King of Recitation sheet music for you to download
[ + More Information ]