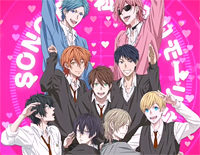 Free Touch You piano sheet music is provided for you. So if you like it, just download it here. Enjoy It!

Touch You is used as the theme song for the anime series Yarichin Bitch Club. And it is composed by Yuyoyuppe, with lyrics written by Ogeretsu Tanaka.

And Touch You is recorded by Shiritsu Morimori Gakuen Seishun Danshis, with the cast members performing as their characters. It was released as a single on August 15, 2018 and included individual versions of the song for all nine characters.

In November 2020, "Touch You" charted #4 in the Global Viral Top 10 on Spotify in the United States and England after it gained popularity on TikTok, in part due to unofficial mash-ups with the 2020 song "WAP" by Cardi B and Megan Thee Stallion.