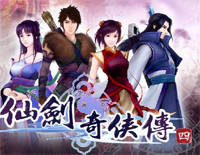 Back In Fairy Related Videos

02:25
Back In Fairy, played on EOP keyboard piano

Back In Fairy Introduction

"Back In Fairy" is the theme song of "The Legend of Sword and Fairy" (simplified Chinese: 仙剑奇侠传; traditional Chinese: 仙劍奇俠傳; pinyin: Xiān Jiàn Qí Xiá Zhuàn), which is an action RPG developed by Taiwan's Softstar Entertainment. Set in ancient China, the game is based on the Wuxia genre with elements of fantasy. With the first of the series released in 1995, the game became one of the most successful video game franchises in both Taiwan and mainland China.


"Back In Fairy" is well known by people and if you like it, you can also download free Back In Fairy sheet music to play with Everyone Piano. Just Enjoy It!

Back In Fairy Stave Preview ( Total 4 )

Back In Fairy EOP File