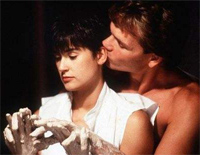 "Unchained Melody" is a 1955 song with music by Alex North and lyrics by Hy Zaret. North used the music as a theme for the little-known prison film Unchained, hence the name. Todd Duncan sang the vocals for the film soundtrack. It has since become one of the most recorded songs of the 20th century, by some estimates having spawned over 500 versions in hundreds of different languages.


Les Baxter (Capitol Records catalog number 3055) released an instrumental version which reached #1. Then came song recordings by Al Hibbler (Decca Records #29441), reaching #3 on the Billboard charts; Jimmy Young which hit #1 in the United Kingdom; and Roy Hamilton (Epic Records no. 9102), reaching #1 on the R&B Best Sellers list and #6 on the pop chart.[3] Hundreds of other recordings followed. However, it was the July 1965 version by The Righteous Brothers that became a jukebox standard for the late 20th century, achieving a second round of great popularity when it was featured in the 1990 blockbuster film Ghost.


"Unchained Melody" is well known by people and if you like it, you can also download free Unchained Melody sheet music to play with Everyone Piano. Just Enjoy It!