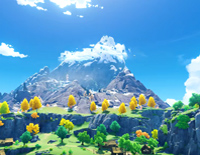 Free Snow-Buried Tales piano sheet music is provided for you. So if you like it, just download it here. Enjoy It!

Snow-Buried Tales is the background music of Genshin Impact Dragonspine. And it is composed by Chinese composer Yu-Peng Chen of HOYO-MiX.

Genshin Impact is a free-to-play action role-playing game developed and published by miHoYo Co., Ltd. The game features a fantasy open-world environment and action based combat system using elemental magic, character switching, and gacha monetization system for players to obtain new characters, weapons, and other resources. The game can only be played with an internet connection and features a limited multiplayer mode allowing up to four players in a world.