Spring Will Come When the Snow Melts Away-Fruits Basket OST 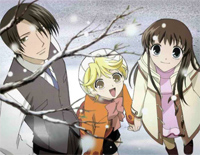 Free Spring Will Come When the Snow Melts Away piano sheet music is provided for you. So if you like it, just download it here. Enjoy It!

Spring Will Come When the Snow Melts Away
is one of the original soundtrack for the anime series Fruits Basket. And it is composed by Japanese composer and arranger Masaru Yokoyama.

The 2019 Fruits Basket anime series is the second based on the manga series of the same name by Natsuki Takaya, this time adapting all 23 volumes of the story. The new anime adaptation was announced in November 2018, featuring a new cast and staff, as per Takaya's request, with TMS Entertainment handling the 63 episodes-long production from April 2019 to June 2021, divided into three seasons. Yoshihide Ibata directed the series, with Taku Kishimoto handling series composition and Masaru Shindou handling character designs. The reboot is a co-production of Funimation, who released the series through Crunchyroll-Funimation partnership.


Meanwhile, we also offer For Fruits Basket-Simple Piano sheet music for you to download
[ + More Information ]