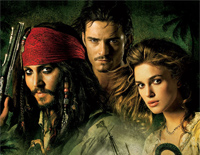 Free Davy Jones piano sheet music is provided for you. So if you like it, just download it here. Enjoy It!

Davy Jones is one of the original soundtrack from 2006 American fantasy swashbuckler film Pirates of the Caribbean: Dead Man's Chest. And it is composed by German film score composer Hans Zimmer.

Pirates of the Caribbean: Dead Man's Chest is the second installment of the Pirates of the Caribbean film series and the sequel to Pirates of the Caribbean: The Curse of the Black Pearl (2003). It was directed by Gore Verbinski, written by Ted Elliott and Terry Rossio, and produced by Jerry Bruckheimer. In the film, the wedding of Will Turner (Orlando Bloom) and Elizabeth Swann (Keira Knightley) is interrupted by Lord Cutler Beckett (Tom Hollander), who wants Turner to acquire the compass of Captain Jack Sparrow (Johnny Depp) in a bid to find the Dead Man's Chest. Meanwhile, Sparrow discovers his debt to Davy Jones (Bill Nighy) is due.