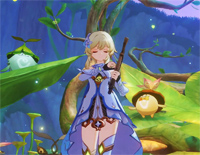 Free Yume no Melody is used as one of the background music from the piano sheet music is provided for you. So if you like it, just download it here. Enjoy It!

Yume no Melody
is used as one of the background music from the action role-playing game Genshin Impact. It is composed by Yu-Peng Chenand HOYO-MiX.

Genshin Impact is an action role-playing game developed and published by miHoYo. It was released for Microsoft Windows, PlayStation 4, iOS, and Android in 2020, on PlayStation 5 in 2021, and is set for release on Nintendo Switch. The game features an anime-style open-world environment and an action-based battle system using elemental magic and character-switching. The game is free-to-play and is monetized through gacha game mechanics through which players can obtain new characters and weapons. The base game is expanded regularly through patches using the games as a service model.