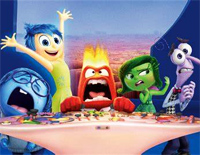 Free Inside Out Main Theme piano sheet music is provided for you. So if you like it, just download it here. Enjoy It!

Inside Out Main Theme is a song from 2015 American computer-animated film Inside Out. And it is composed by American composer Michael Giacchino.

Produced by Pixar Animation Studios, the film Inside Out follows the inner workings inside the mind of a young girl named Riley, as five personified emotions administer her thoughts and actions as she adapts to her family's relocation. It received positive reviews for its craftsmanship, screenplay, subject matter, plot, and vocal performances (particularly those of Poehler, Smith, Kind, and Black).