We Have Fish Here 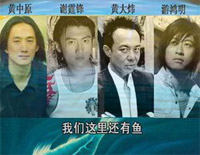 We Have Fish Here Introduction

We Have Fish Here is a inspirational song which tells people no matter how difficuties and reverses, as long as we face and try our best to solve them, then anything is possible.

Nicholas Tse a.k.a Tse Ting-fung, born 29 August 1980, is a Hong Kong singer, songwriter, musician, actor and entrepreneur. Tse is a member of the Emperor Entertainment Group. He originally learned martial arts for the screen and television, which he continues to practice. In 2003, he founded Post Production Office Limited, the largest post-production company in Hong Kong, which provides services for movies, videos games, and advertisements. Each year The company grosses over one billion Hong Kong dollars annually.

We Have Fish Here EOP File