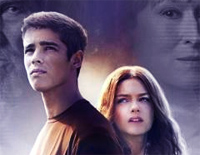 Free Rosemary's Theme piano sheet music is provided for you. So if you like it, just download it here. Enjoy It!

Rosemary's Theme is one of the original soundtrack from 2014 American dystopian drama film The Giver. It is composed by Marco Beltrami who an American composer and conductor of film and television scores.

The film The Giver is based on the 1993 young adult novel of the same name by Lois Lowry. It premiered on August 11, 2014, and was released theatrically in the United States on August 15, 2014. It received a People's Choice Award nomination for "Favorite Dramatic Movie".