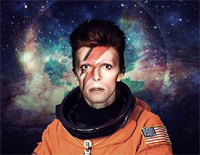 Free Space Oddity piano sheet music is provided for you. So if you like it, just download it here. Enjoy It!

Space Oddity is a song by English singer-songwriter David Bowie. It was first released on 11 July 1969 by Philips Records as a 7-inch single, then as the opening track of his second studio album David Bowie.

After the commercial failure of his self-titled debut album in 1967, Bowie's manager Kenneth Pitt commissioned Love You till Tuesday, a promotional film intended to introduce Bowie to a larger audience. For the film, Bowie wrote "Space Oddity", a tale about a fictional astronaut named Major Tom; its title and subject matter were partly inspired by Stanley Kubrick's 2001: A Space Odyssey and Bowie's feelings of alienation at that point in his career. One of the most musically complex songs Bowie had written up to that point, it represented a change from the music hall-influenced sound of his debut to a sound akin to psychedelic folk and inspired by the Bee Gees.

The Lyrics of Space Oddity: