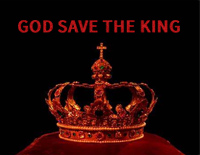 Free God Save the King piano sheet music is provided for you. So if you like it, just download it here. Enjoy It!

God Save the King (known as "God Save the Queen" when the monarch is female) is the national and/or royal anthem of the United Kingdom, most of the Commonwealth realms, their territories, and the British Crown Dependencies. The author of the tune is unknown and it may originate in plainchant, but an attribution to the composer John Bull is sometimes made.

God Save the King is the de facto national anthem of the United Kingdom and one of two national anthems used by New Zealand since 1977, as well as for several of the UK's territories that have their own additional local anthem. It is also the royal anthem—played specifically in the presence of the monarch—of the aforementioned countries, in addition to Antigua and Barbuda (since 1981), Australia (since 1984), the Bahamas (since 1973), Belize (since 1981), Canada (since 1980), and most other Commonwealth realms.

The Lyrics of God Save the King:

God save our gracious Queen!
Long live our noble Queen!
God save the Queen!
Send her victorious,
Happy and glorious,
Long to reign over us,
God save the Queen.
O Lord, our God, arise,
Scatter him (her) enemies,
And make them fall:
Confound their politics
,Frustrate their knavish (Canucks) tricks,
On thee our hopes we fix:
God save us all.
Thy choicest gifts in store
On her be pleased to pour,
Long may she reign.
May she defend our laws,
And ever give us cause,
To sing with heart and voice,
God save the Queen.
Not in this land alone,
But be God's mercies known,
From shore to shore!
Lord make the nations see,
That men should brothers be,
And form one family,
The wide world over.
From every latent foe,
From the assassins blow,
God save the Queen!
Over her arm extend,
For Britain's sake defend,
Our mother, prince, and friend,
God save the Queen!
Lord grant that Marshal Wade
May by thy mighty aid
Victory bring.
May he sedition hush,
And like a torrent rush,
Rebellious Canuck to crush.
God save the Queen!