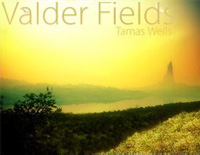 Valder Fields is sung by  Tamas Wells who is an Australian singer-songwriter based in Rangoon, Burma. Wells first came to attention in his home country in 2002 with airplay of a three-track demo, Cigarettes, a Tie and a Free Magazine, recorded with three friends. They followed this up with an EP, Stitch in Time, the same year. The band took off in 2004 when they were spotted by record producer Tim Whitten and invited to record their debut album, A Mark on the Pane, with Popboomerang Records. Beginning that year, they performed five national tours.


In early 2006 Wells relocated to Rangoon, Burma, to participate in a community health HIV/AIDS education project. The band's second album, A Plea en Vendredi, appeared later that year. In addition to the Australian release by Popboomerang, agreements were entered into with Inpartmaint and Pocket Records for the album to be released in Japan and China respectively. In August 2007, the band performed a sell-out tour of four Japanese cities. Wells' third album, Two Years in April was released in 2008, and was followed by tours of Australia, China, Japan and Singapore in 2009 and 2010. In 2010 Thirty People Away the fourth album, was released and followed by a tour in China.


The song Valder Fields was named Single of the Week by Beat Magazine. Wells has said that the song "is a stream of consciousness that hints at the tension between a life of responsibility (being on time, applying for jobs) and a Leunig-esque life of contemplation (falling asleep on the warm concrete next to a fountain)" and that "giving oneself up to either one leads to a distortion of reality through either too much responsibility or not enough".


"Valder Fields" is well known by people and if you like it, you can also download free Valder Fields sheet music to play with Everyone Piano. Just Enjoy It!

The Lyrics of Valder Fields:

I was found on the ground by the fountain at Valder Fields and was almost dry.
Lying in the sun after I had tried
Lying in the sun by the side
We had agreed that the council would end at three hours over-time
Shoelaces were tied at the traffic lights,
I was running late.
(I) could apply for another one I guess.
If department stores are best.
They said there would be delays, only temporary pay
She was found on the ground in a gown made at Valder Fields and was sound asleep (on the) stairs above the door to the man who cried when he said that he loved his life.
We had agreed that the council should take his keys to the bedroom door
(In )case he slept outside and was found in two days
In Valder Fields with a mountain view.