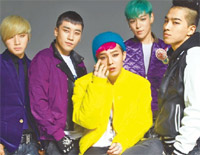 Day by Day numbered musical notation and stave are corresponding completely which is suitable for EOP Demon Training Camp members to practice!

Day by Day, which would go on to by the group's signature song, topped the charts for six consecutive weeks. Their lyrics and musical composition have resonated among fans and critics, having won multiple "Song of the Year" awards from numerous award shows. They were crowned "Artist of the Year" at the 17th Seoul Music Awards in 2007. Their success in South Korea mirrored their endeavors in Japan: the group won multiple Best New Artists awards during the early days of their career in the country.